Visit to the Great Northeast

I went on a somewhat unexpected trip to the Northeast a few weeks ago.  Unexpected because typically at this time of year I’d be at Endor, but with Endor not happening on-site this semester I’m free to travel around doing computer work remotely.  Yay! (see Agile Unschooling)

My old friend, housemate, and former co-worker at Endor and Not Back To School Camp, Brenna, was heading up to Vermont for NBTSC, so I jumped on board to visit the Yankee states.

The first stop was Philadelphia, where I had hoped to visit my friend Margie Sanderson at the Philly Free School.  Unfortunately the school was closed that entire week due to Pope Francis’ visit the following Saturday.  “Pope Week.”
On the way back down to NC a few weeks later we stopped in Philly again.  I got to see Margie and talk Free School, but didn’t have time to visit the school.  I’m always careful to choose my words talking about Unschooling or Agile Learning with people from a conventional-school background because I don’t want to make it sound like I’m judging their path.  I found that talking with someone who works at a Sudbury type school requires even more tact, at least when talking about ALC.  Margie was really interested in ALC stuff, but from what I understand the Philly Free School has a great culture and isn’t looking for more tools/practices/collaborators.  So, every time I pointed out where ALC does things differently than a Sudbury school, I felt like I was judging Margie’s schools philosophy.  I don’t know that she took it that way, but I’m making sure to be extra tactful next time I discuss ALC stuff with DFS folks.

I went on to Connecticut to visit my parents and sister, who’s the first in the family to go to high school.  My adult brother (it’s his birthday today!  Happy Birthday, Ingmar) and I were/are Unschooled to this day.  As is she, in a certain way.  My sister chose to go to high school after spending a year at Beacon, a Northstar Network School in New Haven.  The school she goes to now is called Wright Tech – a state owned trade school that they just spent $91,000,000 renovating.  Unfortunately, it seems like they blew the whole pot on facilities and spent about thirty minutes on Craigslist looking for their “teachers.”

I’ve always been hesitant to judge what goes on in a conventional school since A) I’ve never been, B) free daycare is a great social service, C) I have great respect for teachers and what they set out to do.  That being said, every single thing my sister tells me about her school makes me think of one thing.  Looking through the lens of the hallowed 3rd root of ALC, the media is the message, she paints a picture of high school being a place where throughout their day they model the routines and rules of a prison.  They’ll do things like write down 25 of the United American States, but if they go over 25, they get points taken out!  What in the world.  Pretty clear 3rd root lesson there is to DO WHAT YOU’RE TOLD.

I suggested to my sister that she start a student union; that she put together a simple document to spread around the school to build text messaging lists, and then take action through a strike, sit-down, walk out, etc.  My sister’s school is only on its second batch of students since reopening renovated, so the student body is about 150 strong.

She was worried about what most prospective union organizers are.  She said the staff would say “you’re being disruptive, we’re going to expel you.”  I told her that wouldn’t happen if she had a strong union presence behind her.  I said “. . . the school isn’t there so that teachers can have jobs, it’s there so that you can get educated.  It’s not there for them, it’s for you.”  And now I can’t remember exactly what the context of that statement was, but I thought it sounded good.  So there it is.
As of now, my sister is not starting a union.  But we’ll see.

After some time in Connecticut, I went to NYC to attend Maker Faire.  There I saw @failspy and @douglasawesome exhibiting Galactic Nemesis.  I also saw my old friend Jay Silver present on “Casual Inventing,” which he summarized by saying “. . . the invention muscle is more like a sphincter than a bicep.  You’ve just got to relax and let it do its thing.”  I work with Jay as the community manager at his company JoyLabz.  Jay is an incredibly well educated and smart person, who despite having attended a huge amount of school, is all about Unschooling.  Jay creates hardware with Unschooling-type philosophy embedded into them – things that get you to look at and interact with the world in different ways.  You might be familiar with Drawdio, or Makey Makey, or Singing Fingers.

After Maker Faire I went over to @abbyo’s where @drew and I played with the pattern function on Illustrator, which eventually led me to make this awesome Trello board backdrop.  Which I will gladly show you how to use, but likely not ever blog about. 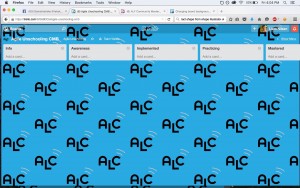 The next day I visited ALC NYC!  Whoohoo!  It was great.  It was super cool to meet all the students and to work 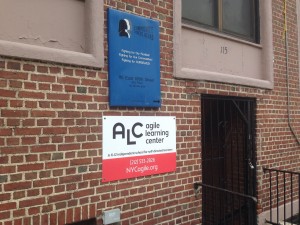 jam with lots of other ALFs.  Six ALFs, all in the same place, wow. In alphabetical order: @Abbyo, @abram, @bear, @drew, @liam, and @ryanshollenberger were all present.  I felt very welcomed by all the students as well.  Some were curious about who I was and why I was there, but mostly people just accepted that I was there and didn’t think much of it.  No one was shy or nothin’, it was great.  I had a bunch of work to do on Agile Unschooling, so after participating in the student led spawn point and setting intentions with them, I sat down and did some writing. 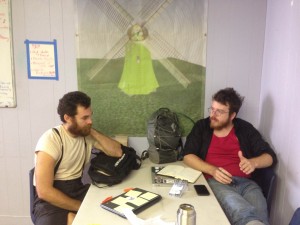 I walked in on a discussion about ALC Network governance with @bear and @drew which was pretty interesting.  I really loved being in a place where I could just stumble upon that happening. So much energy at that ALC.

I also really loved the space.  Made me think about how things would have been different at Endor last year if we had had a place like that.  Huge windows, lots of different rooms, tons of couches, lots of tables and work stations and stuff, a three minute walk from Central Park. . . ugh.  So good.

Got to watch the latest episode of my favorite sci-fi cartoon Rick and Morty with @failspy.

I ended up having such a good time that I stayed the night to attend school the following day as well.  And then I got to see @tomis, too!  Yay!

Then I went to NBTSC and presented on ALC, more on that next time in: